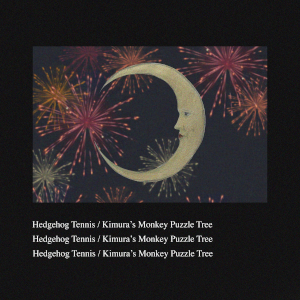 Hedgehog Tennis! Wow! What a classic! This was written

at the start of summer 2021. It was the second to last song in a really

consistent songwriting phase (phase?) which lasted from September of

I'll get to next, towards the end of the summer. Hedgehog Tennis

was going to have a music video to help promote it, but I hate making

them so I didn't. Similarly to the other songs I wrote at the time,

Hedgehog Tennis has pretty vague lyrics, so you can interperate them

Kimura's Monkey Puzzle Tree isn't that good! Let's be honest! I was

I only had like one song in 3/4 at the time, but I didn't fully commit

to this and made something very simple instead. Idk there's not really

much to say about it. I'm no good at recording quiet songs yet and this

song is the best example of this. It sounds like shit.

review. Maybe it should have been called "Hedgehog's Dilemma" instead.

Hedgehog Tennis was mostly influenced by

You can listen to the single at these places: